A transition piece is used as a connection between a driven pile (Monopile) and the tower of an offshore wind energy plant. The installation procedure provides that a transition piece is placed with a certain overlap length on the monopile. The resulting annular gap between the two tubes is then filled with a grout.

In the formation of the transition piece, two variants have prevailed:

By 2007, more cylindrical Grout connections were used without shear ribs, which support and fatigue strength under dynamic loading have proved to be insufficient. There were landslides between transition piece and monopile (shake-down effect). This led to intensive research and new regulations in the offshore guidelines. Today's structures with transition piece planned either as cylindrical steel pipes with thrust ribs or conical steel pipes without shear ribs.

Due to the large rolling mills and the use of thick plates can now transition piece to be manufactured to a diameter of more than 7,000 mm, which are then eligible for the so-called XL-monopile used.

On the part of SKI Ingenieurgesellschaft the following services can be provided: 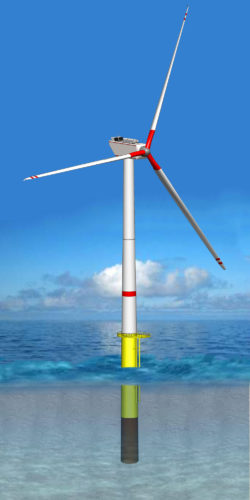 Wind turbine with a monopile foundation